free shipping on orders over $300 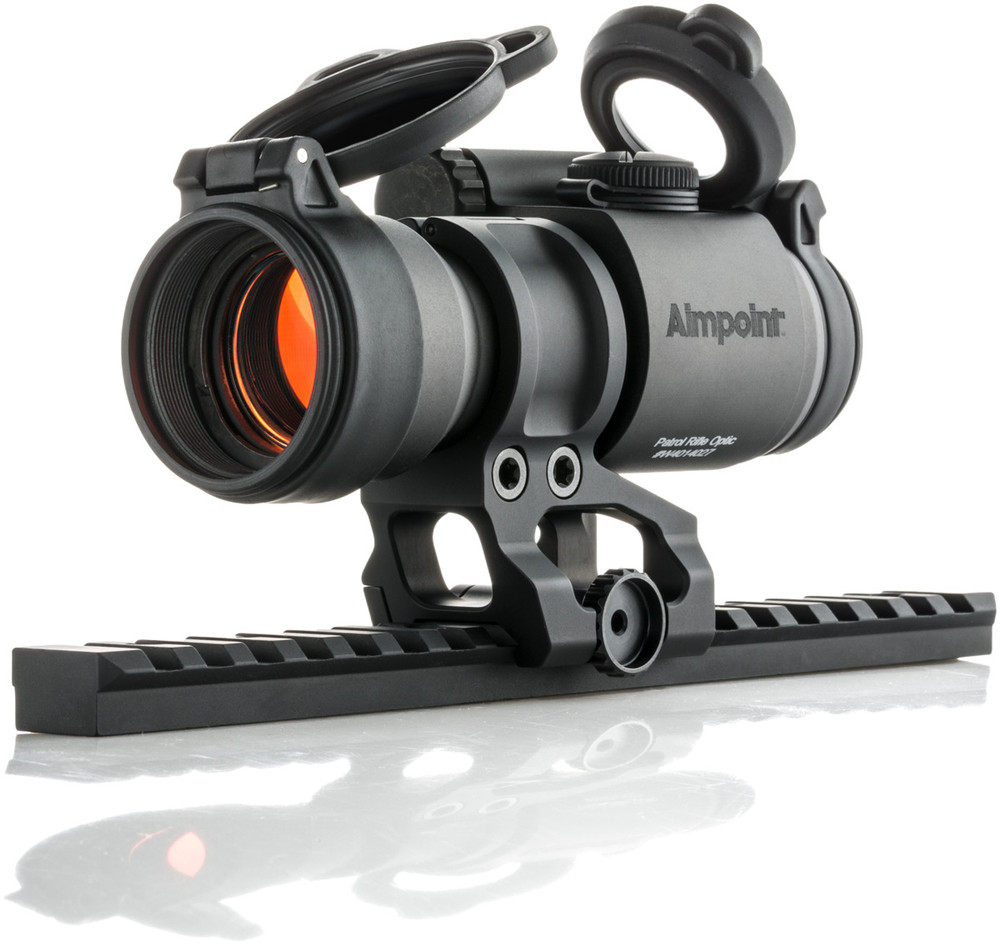 The Leap Mount returns to zero on every re-installation, and holds zero under the heaviest recoil. Guaranteed.

Engineered to be the lightest Aimpoint PRO QD mount, without compromising an ounce of strength. The Leap is the strongest Aimpoint PRO Quick-Detach mount we've ever tested. We put a variety of QD mounts on a digital test stand, capable of exerting up to 1500lbs of force, and analyzed load versus displacement data for each. We then used everything we learned from these tests to refine our original design, culminating in the Leap; a quick-detach mount that is both the lightest and strongest on the market today.

A highly efficient clamp design guarantees precise operation and unprecedented rigidity: It features an oversize hooded thru-hole to buttress the thumbscrew's shank, which is the maximum possible diameter to fit a Picatinny channel. A pair of hardened steel precision ground pins is press fitted to the clamp and act as guides. During it's development, the Leap mount was subjected to dozens of stress tests before a single prototype was ever made. Finite Element Analysis (FEA) helped extract every bit of performance from every gram of material. This cutting edge design process has resulted in the most efficient mount design possible. Every Leap Mount is CNC milled from 7075-T6 billet, which has vastly superior mechanical properties to 6061-T6, and is used where ultimate strength and durability outweigh cost considerations.

The Scalarworks Ring was designed from the ground up to be stiffer, sleeker, and lighter than traditional rings. A precision fitted hinge ensures even pressure around your optic, without requiring the tedious and imprecise setup that traditional rings do. Twin oversize CNC machined shoulder screws provide even tension and act as structural elements, making the entire ring assembly phenomenally rigid. Each side of the Scalarworks Ring is carefully lightened with a curvature continuous scallop that produces a very high strength-to-weight ratio. The Scalarworks Ring is wider than competing designs, providing more surface area to safely and securely hold your optic.

As narrow as a bolt-on mount: the Leap has no protruding levers or knobs to rap your knuckles, or get caught on clothing, gear, and surroundings.

The Leap mount is the most deliberate evolution of our original Low Drag Mount design.

From it's introduction in 2014, the original Low Drag Mount featured our recoil proof Quantum Quick-Detach mechanism, a precision telescoping clamp with world class return-to-zero, and a CNC milled base with the industry's highest strength-to-weight ratio, all while being as low-profile as a fixed bolt-on mount.

In 2015, the second generation Low Drag Mount became the first Quick-Detach mount ever to be CNC milled from 7075-T6. It's external edges were rounded to minimize stress risers, the thumbscrew was Black Nitrided, and a pair of integral shear lugs was added to the clamp to further improve lateral impact resistance.

Today, the Leap mount features a re-engineered base with a forward lean to provide more room for magnifiers, and chamfered side pockets for improved thumbscrew access. The re-designed clamp has discreet hardened steel pins and a stopper to indicate when it's sufficiently open to clear a Picatinny rail.

The Scalarworks® Quantum™ Quick-Detach mechanism is completely recoil proof, while requiring only enough torque to firmly clamp onto a Picatinny rail. By decoupling torque from vibration resistance, the Quantum™ QD mechanism is intuitive, fast, and self adjusting, all without needing an imprecise knob or obtrusive lever to keep it from shaking loose. The Quantum™ QD's recessed head is carefully designed to deflect external impacts, while letting you take the mount off in under 3 seconds, with or without gloves.